Old Grandpa Dick Johnson finished off his first time playing in the Idaho Senior Games by picking up Gold and Silver medals in Tennis.  This totaled 8 medals in all (6 Gold, 1 Silver, & 1 Bronze) won by Dick in Tennis, Pickleball, & Table Tennis (He technically won 4 more Golds in Table Tennis, because, though 73, he beat every player from 50-74 years old).  Dick dug out his tiny, old tennis racquet from 23 years ago, which he had used in the last tennis tourney and state championship he won in 1990, after which he quit playing the game (Not being too bright a guy, in 1990 he had continued playing competitively even after a back fusion in 1975).

Anyway, it was fun for him to play tennis again…and, kind of a milestone, because he’s now won state tennis championships in every decade, except one when he didn’t touch a racquet, since he was 14 years old.  Truthfully, though, after picking up his old vintage racquet, serving underhand because of the bum back, and grunting through his first tournament in 23 years, we think its probably wise for him to stick with Table Tennis and Pickleball, where the court sure seems a lot smaller!  Besides, Pickleball has brought great new friends into our lives… and, is so much fun!!! 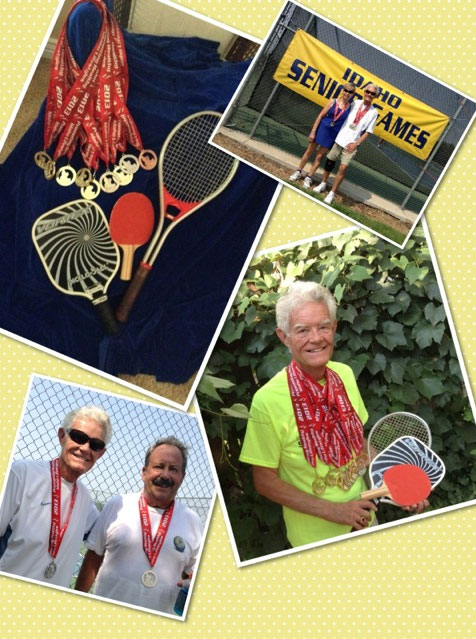