We had another great club tournament on February 19th.  Thanks to Kathy Getto and Terry Donohue for putting on the fun event.  We had a total of 24 players.  The format this month was to play 5 games for 10 minutes each, at the end of the 10 minutes you gave the score to the scorekeeper and then drew for another partner for the next game.  When all 5 games were played, the top 16 players were set up for bracket play.  It was a fun tournament.

The results are as follows: 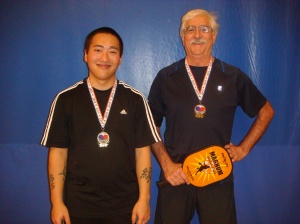 Congratulations to all that participated this month and to those that volunteered to score keep (Jack Bonawitz) and referee…  Also, the goodies were awesome!!  See you next month.  Tentatively set for March 19th – Russ Bell and Doug & Trish Carlson will be putting on the tournament – stayed tuned for more details…