The Boise Area Pickleball Association’s (BAPA) November monthly tournament is in the books.  We want to thank all the volunteers who helped with the tournament.  Tournaments aren’t successful without great volunteers. This month’s tournament was a random draw doubles tournament and each player played five games. Everyone had a great time playing, eating and just laughing and talking to all the club and non-club member who were there.  It always a great time so sign-up for January’s tournament.

Now for the results:  Men’s Gold medal winner was: Rodell Hill, Silver went to Terry Donahue and the Bronze went to Dennis Kincheloe.  There were 11 men signed up.

Women’s Gold medal winner was: Sony Kincheloe, Silver went to Chris Carter (her first medal in a tournament) and Bronze went to Candy Bonawitz.  We had six women signed up. 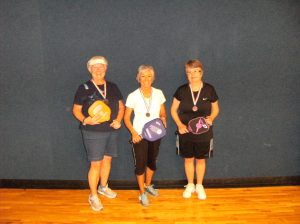