On Tuesday, September the 25th, the Boise Area Pickleball Association (BAPA) held their first monthly round-robin style club tournament.  The tournament was held at the Hobble Creek Park’s tennis/pickleball courts. A great time was had by all.  There were 8 ladies and 12 men vying for the gold.  All players played five games and with each game they had a new partner, which made things interesting and fun. The results were:

Women’s Gold was won by LeAnne Stenberg who has only been playing off and on for around five months,  Silver was won by Sonya Kincheloe, one of the clubs first members, and Bronze was won by Tami Leach, one of the founders of BAPA. 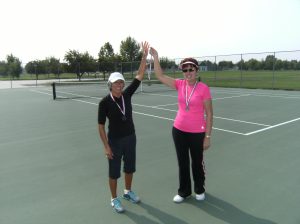 Men’s Gold was won by Joe Bonawitz, the youngest member of BAPA at 25, Silver went to Stan Sluder also one of the club first members, and Bronze went to the clubs 1st President, Perry (Rudy) Whittaker.

The club will be having monthly club tournaments so if you not a member better join soon and get in on the fun.  Contact BAPA at boiseapa11@gmail.com .

The club also held a pot-luck dinner at Tully Park at 6pm that night with fun and food enjoyed by at least 20 of the club’s members.  Just another reason to join this fast growing club.  Hope to see some new members at the next tournament.  For more information about the club and places to play click on the tabs above and check things out.

To see more pictures of the tournament, click on the “Photos” tab.