Well Friday night we played our 1st nighttime games at Sawtooth Middle School.  We had 22 players come out for a great time!  The temperature was hot (92 degrees), but the games were even hotter!!  We had new people, winter birds, even a youngster join us.  I say maybe out last time, because Friday night almost didn’t make it – due to someone pulling off our court tape.  Originally we taped 4 courts (out of 6) on Tues, then Friday morning found out that 3 of the 4 courts were pulled up.  Fortunately the club had 2 more rolls of tape – so my wife and I, with assistant from Don McDaniel and Steve Vaus, taped two courts.  So Friday we had 3 courts to play on – which we really could have used all 6 courts!!  The plan is to try playing again on Tuesday night (6pm) if the tape hasn’t been pulled up again.  It’s too costly and time-consuming to tape each time, but we are a resilient bunch of enthusiast pickleball players who don’t give up easily – so we’ll see how it goes…  Thanks to all those who came out and had fun!!! 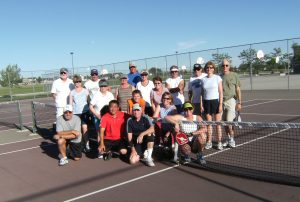 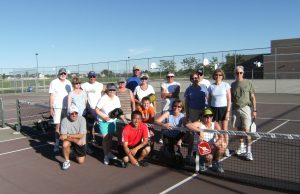